Boy Did We Miss a Grate Weekend in Magnolia Arkansas!

This past Saturday, 87 teams competed in the annual World Championship Steak Cook Off and we weren't there! We were in Chicago exhibiting at the National Restaurant Show to Chefs all over the world. That's the good news. The bad part is we missed traveling to Magnolia this year to be part of the event. Last year I vowed we would attend every year, never make promises you cant keep. 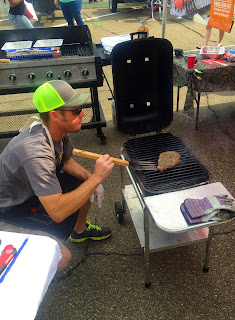 Joe Stump of Smoke House Rats, the 2014 World Champion, became only the 2nd person in 26 years to repeat as champion. It gets better. His partner, Dustin Sanders placed 2nd. Since last year's win, Joe and Dustin have been on a roll, easily the top money winners in steak competitions. Yes, you read that right, competition steak cooking has hit the big time. The Steak Cook off Association is now in its 2nd season with cook-offs popping up all over the US, Canada, and even Europe!

The organizers in Magnolia have the formula down to an art form, including feeding over 3,000 people who pay for a sit down steak dinner on the town's square. After the teams submit their entries for the competition, they are given steaks to grill for the public who choose which team to get their steak.

The formula for a championship steak is an art form too! With a lot of practice and observation, I've boiled down the formula into three parts:

GrillGrate used on Weber Kettles has become synonymous with championship steaks, but this year a new grill emerged from the past. It's called the PK Grill. Born in 1952 (same year as Weber) and recently re-introduced to resounding success. In fact, 3 of the top 5 finishers grilled on PK Grills outfitted with GrillGrates. 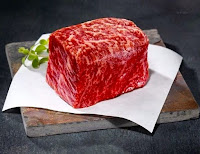 Steak grilling techniques could fill a book, but one thing is a given; buy the best piece of meat you can find. Shane Vaughn of Snake River Farms says marbling is key. Marbling are the small rivulets of fat that run throughout a steak and are what give it it's buttery texture and outstanding flavor. M ore marbling equals a better steak!

Next year I am again vow not to miss the World Championship Steak Cook-off in Magnolia Arkansas. We'd love to see what we missed!  Got any pictures or video to share?
Posted by Unknown at 5:24 PM 1 comment:

I love Chicago even more after spending 5 days exhibiting at the National Restaurant Show (NRA) by day and eating well at night. The Amex card may singed but we got what we paid for! The NRA Show was a culinary experience and a huge show with over 70,000 people and 2000+ exhibitors. Four solid days of talking GrillGrate with people from all over the world. The show also provided us with valuable contacts for cleaning products, commercial grill manufacturers, even ball caps. 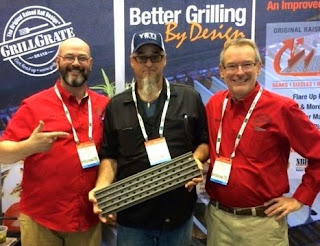 The NRA show formally marks GrillGrates extension beyond the back yard. Chefs and caterers have been using GrillGrates for some time now and we felt it was time to further test and develop the commercial / professional waters. The response was down right humbling! We thought we'd have to do some serious convincing so we put out an aggressive show special to encourage chefs to measure their chargrillers and flat-tops to test GrillGrates in their environment. We even called in an order from our booth for a caterer and shipped it that day so he could use them this weekend for a 150 person event at a Chicago Whitesox baseball game! As Werner Wolf says, “film at 11:00!” 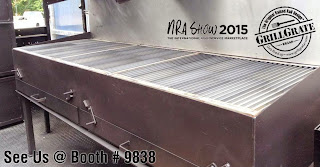 The NRA show hopefully becomes an annual fixture on our schedule even if it coincides with two of my favorite events; Memphis in May and the annual World Championship SteakCookoff at the Magnolia Blossom Festival in Magnolia, AR. Talk about a culinary trifecta!

This past saturday Grillmaster Joe Stump from Boyd, Texas repeated as world champion! Yes he grilled on GrillGrates! Over in Memphis, The SHED Barbecue and Blues Joint won Grand Champion of Memphis in May. All around a winning weekend!

We're already talking about how next year we need to split up over the weekend and converge on Chicago on Sunday. Talk about a grate problem!